Recipe and instructions on how to make vodka:

Vodka is traditionally made by the distillation of fermented grain or potatoes. However, there is a growing trend 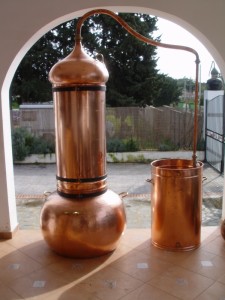 among distillers towered the use of fruits and sugar. One of the defining characteristic of vodka is that unlike most other spirits it’s not aged in oak barrels. As such, vodkas closest relative would arguably be moonshine. Since neither vodka nor moonshine are aged.

The European Union requires that any spirit advertised as “European vodka” must have an alcohol content of at least 37.5%.  The United States requires and product being sold as vodka to be at least 40% alcohol.

Vodka is most commonly distilled using a column still. As opposed to using a pot still. Vodka typically carries over much less flavor from its ingredients than other spirits such as whiskey. Mush of this has to do with the type of still that is used.  Traditionally whiskey was made using pot stills. However, the Scottish started switching over to column stills. The Irish on the other hand felt that pot stills produced the best whiskey. This disagreement over which still was better lead to the Irish adding an “e” to the word whisky. To this day Scotch whisky is spelled without the extra “e” and Irish whiskey spelled with it. 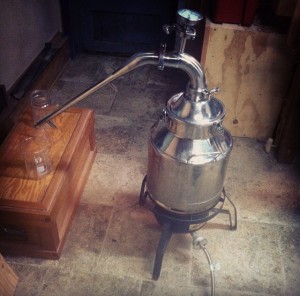 Column stills tend to produce a more pure but arguably less flavorful spirit. This is due to the long column from which it derives its name. The reason for this is that alcohol evaporates at a lower temperature than water. However, water also evaporates along with the alcohol. These water and alcohol vapors begin to cool as they rise up the column. Since water evaporates at a lower temperature it will begin to liquidize and trickle back down the column. Whereas the alcohol will continue to travel up the column until it reaches the condenser. This is why column still produce a more pure but arguably less flavorful spirit.
The first thing to consider when making vodka is what kind of ingredients you want to use. Although vodka is commonly made with potatoes, it’s hardly ever the only ingredient that is use. Distillers will commonly use some combination of potatoes and grain. The reason for this is that potatoes have a lot of starch that must be broken down into sugar with the use of enzymes. This can be done either by the introduction of a malted grain or from a packet. Both of which should be available wither at your local home brew supply store or online.

The problem with potatoes is that the starch must first be broken down into basic sugars so that the yeast can use them. This is done by using enzymes, either via malted grains or from a packet. It’s important to note that when using an enzyme rich grain, the grain should be milled or flacked. Both potatoes and grain need to undergo a process of gelatinization. This is achieved by boiling them in water at a temperature of 150 degrees fahrenheit. It is also important to note that any temperature over 160 degrees will destroy the enzymes. As with the grain, the potatoes should be shredded before being added to the water.

Step 1 making your mash: Clean your potatoes before adding them to a kettle of water. Leave them in the kettle for around one hour, or until they are soft. Discard the water and mash up the potatoes. Add the grain and potatoes to a kettle of water at 150 degrees. Keep at temperature and periodically sure for an hour and a half. If you are using corn you will have to stir much more frequently. The reason being that unlike barley, corn tends to settle at the bottom and burn. After the time is up let it cool down to 80 degrees.

Step 3 Sterilization: Make sure that everything you use has been sterilized. You mash is not only a great environment for yeast, but it’s also a great environment for bacteria. Bacterial will not only give off a bad taste, but it will also compete with your yeast for nutrients. However, make sure that there aren’t any leftover soap on your utensils since they will harm your yeast just as much as the bacteria.

Step 3 Fermentation: After you pour your ingredients and water into your fermentation vessel you are ready to add your yeast. When it comes to yeast, I would recommend using prestige. Some people like turbo yeast. But some people hate turbo yeast. The fermentation process can take anywhere from 3 days to a week. After pitching your 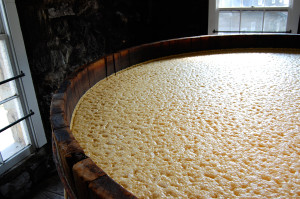 yeast you should start to see some foam start to appear within a few hours. You will want to keep you fermentation vessel between 70 and 80 degrees.

The amount of yeast that you need will depend on how much you are fermenting. A packet of yeast is typically enough to ferment 5 gallons. If you are fermenting more than 5 gallons you will want to use more yeast. A single packet of yeast can ferment 30 gallons of mash into alcohol. The issue however is that the yeast must compete with bacteria and wild yeast that can find their way into your fermentation vessel. The more yeast you add the faster it can ferment your mash. You can also reuse your yeast by saving some of you mash after your fermentation is done. However, you don’t want to do this more than three times. The reason being that you will be recycling bacteria along with your yeast. The yeast will also evolve and change each time you reuse it.

Step 3 distilling: Always remember that alcohol is highly flammable. You should not consume alcohol or leave your still unattended while distilling. Once the yeast is done fermenting and has settled to the bottom you are ready to start the distillation process. You will want to avoid adding any yeast of grain to you still. Distilled yeast can give off some unwanted flavors. You can use some cheese cloth of a clean tee-shirt as a filter. But the biggest thing is to make sure that you don’t disturb the yeast that has settled to the bottom.

Your first run (distillation) is called the “beer striping run.” After your first run you will have what is called “low wine.” You will want to run your still until the liquid comes down to 20% alcohol. You can measure the alcohol content by using an alcohol hydrometer (see page on using a hydrometer). After several beer striping runs you should have enough low wine to do your second distillation. The second distillation is called the “spirit run.” You will first want to water your low wine down to 40% before embarking on your spirit run.

You will want to throw out the first liquid that comes out of your still during the spirit run. If you are using a 5 gallon still, you will want to throw out the first 200-250 ml that comes out. The reason for this is that it’s highly toxic and is not fit for consumption. After doing this you will want a few small mason jars on hand. Use the jars to collect your spirits throughout the run. You will also want to be careful to arrange the jar in the order in which they are filled.

Once the alcohol content drops to 20% you are done. You may find it advantageous to save some of the liquid that is left in the still. You can add this to your next fermentation to help balance the ph and add nutrients. 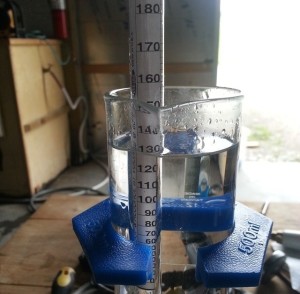 Step 4: Once you are done with you spirit run it’s time to make your cuts (see page on making cuts). Making the cuts refers to separating out what you want to keep and what you want to add to your low wine and redistill. You want to keep what is known as the harts. The heads are what first comes out of the still. The harts are the middle, and the tails is the end. This is why it’s so important to keep your jars ordered from first to last. The harts are typically between 80-65% alcohol. The heads are far too harsh, and the tails are oily in texture and can give off a smell of wet dog.

After you have made your cuts you are ready to bottle your newly made vodka. You will want to water down you vodka to 40% alcohol before bottling. Unlike other spirits, vodka does not need to be aged in or with oak. However, your vodka may mellow out over time.