I was contacted a few weeks ago about doing an interview with one of the co-founders of a small, Connecticut based distillery called Onyx Moonshine. I was hesitant at first, since I wasn’t a big fan of distilleries that market their product as moonshine. Moonshine, by its very definition, is illegally produced.  As such, “legally produced moonshine” is a bit of an oxymoron. However, Adam won me over after interviewing him and reading his book “Living Proof: Onyx Moonshine’s Journey to 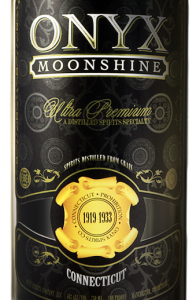 My beef with distillers who market their product as “moonshine” was that I saw it as being nothing more than a marketing scam, since, by  definition, moonshine isn’t legal. But as Adam pointed out “What else do you call it?”. It’s the closest thing you can get to moonshine. After talking about his distilling process, I realized that, besides the legality and safety, there really isn’t any difference between Onyx Moonshine and traditional moonshine.

What really won me over was that Onyx Moonshine is a real small batch distillery. They use two 55 gallon stills. This is incredibly small for an industrial distillery that produces thousands of cases a year. What’s really impressive is that they produce between 4-5 thousand cases a year. How the hell do they produce so much liquor with such a small still? Adams answer, “there are months where we run the stills nonstop.”

Onyx Moonshine started out small. As such, they had to get creative with the limited resources they had. They invented a system by which fermented mash (wart) is continuously fed into the still, something that I have never heard of, but is borderline genius.

Adam and I went on to talk about the flavors produced in such small batches. Since he uses small pot stills, his moonshine carries over the flavors and characteristics of the grain; something that is lost when you use large column stills. He also distills his product twice (beer stripping and spirit run). In my opinion, Triple Distilling is overrated. The more you distill a spirit, the more flavor is lost. By doing two runs, you get a clean crisp spirit without stripping it of its natural flavors. Adam went on to say that as they grow they are adding more 55 gallon stills, rather than moving up to larger stills that can produce more. The reason being that you can’t get the same flavor and characteristics with a large, industrial sized still.

We also talked about the Onyx Moonshine recipe. They use a combination of corn, malted barley, and Connecticut spring water. This led to a discussion about the importance of water in distilling. I brought up an article I had read about how the water you use doesn’t effect the flavor of the spirit, something Adam and I both agreed was hogwash. If you produce a spirit that is 40% alcohol, that means that 60% is water. Adam stressed the importance of good water and pointed out that even though it is distilled, you still have to cut your liquor. Like Adam, I have always felt that the water  used can greatly impact the flavor of the spirits.

Onyx Moonshine has done a great job of separating itself from other distilleries that produce “moonshine.” Other moonshine producers bottle their product in Mason jars. The reason being that they see themselves as more of a novelty brand. Adam and his partner went the other way. They didn’t want to produce a novelty product. Rather they wanted to produce a product that people would buy based on its flavor. Onyx Moonshine isn’t about fulfilling a marketing niche; rather they are about taking pride in producing an original American product.
Adam really captured the essence of distilling spirits with the phrase, “Spirits capture a place and time. It can’t be recreated.” Spirits such as whiskey and moonshine can’t be recreated elsewhere, which is part of the romance. Even if a distillery on the other side of the U.S. copied their recipe and yeast, they still couldn’t get the flavor produced by the water and seasons in Connecticut.

Onyx Moonshine has recently come out with a barrel-aged whiskey. Adam pointed out the importance of Connecticut’s weather and how it plays into producing a quality whiskey. Connecticut had bitter cold winters and hot summers. This causes the barrels to expand in the summer absorbing the liquor and then shrinking in the bitter cold winters. Adam then went into 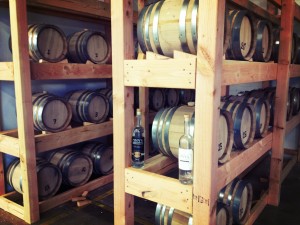 how they taste their whiskey every few months until it’s just right. “You know when whiskey is ready?” Adam asked. “Whiskey is ready when it’s ready.” And he does have a point. As with wine, whiskey changes over time. However, the changes aren’t an even progression. Rather it’s quality and flavor can fluctuate. I had always believed that whiskey got better with age, but Adam did make a compelling case for why that might not always be the case.

At first I was skeptical of Onyx Moonshine. The recent revelations about the dishonest marketing practices by such brands as Templeton Rye left me disheartened and wary of new brands. I haven’t yet had Onyx Moonshine, so I can’t speak to it’s quality. With that being said, I was impressed with the integrity and enthusiasm that Onyx Moonshine has for their product and the legacy of American spirits. They are one of the few legitimate small batch distilleries. They make their own product and they take pride in their product. But perhaps what I like the most about them is that they aren’t pretentious. They have every right to turn their nose up to questionable “distillers” that buy their spirit from elsewhere and simply slap their own label on it.

As previously stated, I can’t speak to the quality of their spirits. What I can say, is that they are one of the few legitimately small batch distilleries out there, and they have a genuine love for their craft. You can’t get much more “small batch” than a 55 gallon pot still, and you can’t get much closer to authentic American moonshine than Onyx Moonshine.